The Walking Dead Onslaught is available in our Box4Gamer! Try your chances of getting it now for only 1.79 € ! 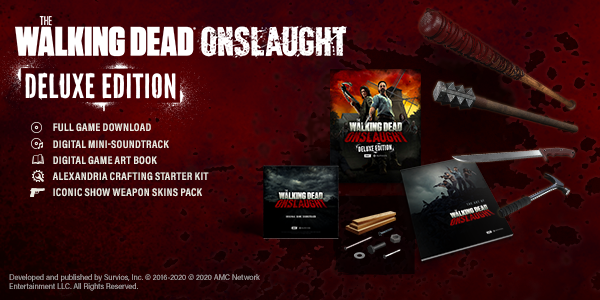 There’s no rest when survival is on the line. Step into AMC’s The Walking Dead and prepare for an onslaught of walkers as you assume the roles of your favorite characters from the show, and confront the horrors and humanity of this apocalyptic new world.

The war with the Saviors has finally come to an end, but the damage lingers in the hearts of those who survived it. It will take risk and sacrifice to mend this broken society and rebuild what remains of Alexandria for future generations. Are prepared to do your part?

STEP INTO AMC’S THE WALKING DEAD

Play as Rick, Daryl, Michonne, and Carol and set up your home base in the Alexandria Safe Zone. Here, you’ll play through chapters of an all-new story, embark on Scavenger runs, upgrade your player stats, modify and customize weapons, trade in resources to grow your community, and interact with your favorite characters. Successfully complete supply runs, and you’ll see Alexandria transform as you rebuild the settlement into a fortified bastion of hope for humanity’s future.

Stave off the walker threat wielding 24 ranged and melee weapons—including iconic pieces from the show— with realistic handling and intuitive VR motion mechanics. Experience the visceral Progressive Dismemberment system that realistically depicts your every attack against the undead. Discover a variety of modifications for each weapon to fine-tune and suit your combat style.

Leave nothing behind. Every trip beyond the walls of Alexandria means a chance to collect valuable weapons, food, materials, and other resources for the community. But beware: every supply run provides unpredictable walker encounters, resource availability, and obstacles to test your sense of flight or fight.

Play as Daryl Dixon through an original campaign story about a supply run gone awry and an ensuing encounter with a watchful stranger in a mysterious town.

Description
There’s no rest when survival is on the line. Step into AMC’s The Walking Dead and prepare for an onslaught of walkers as you assume the roles of your favorite characters from the show, and confront the horrors and humanity of this apocalyptic new world.
__404.en:developers__
Survios
__404.en:publishers__
Survios
Advised sale price
0.00 €
Supported languages
English*
*languages with full audio support
Website
Access the site
APP ID steam
1082680